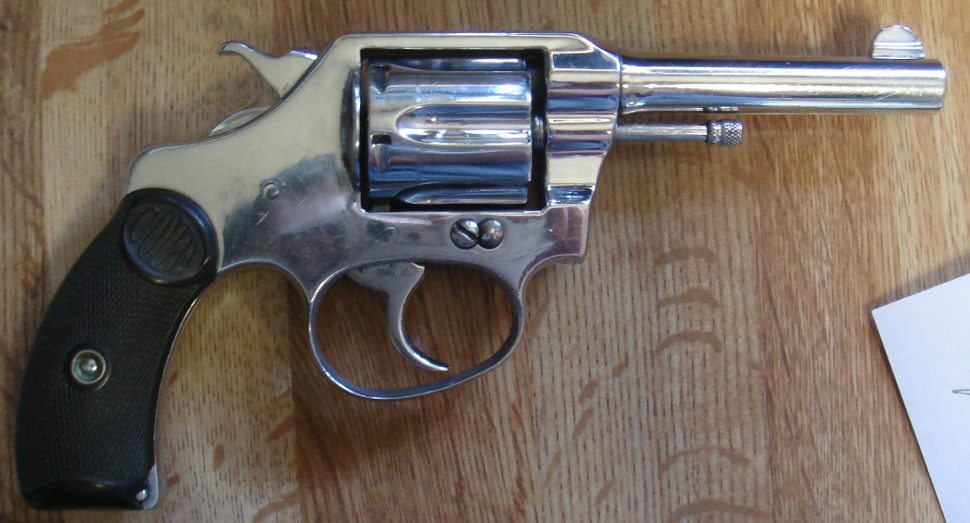 Before I had a Colt Pocket Positive

I tend to prefer revolvers when it comes to pocket guns. They are reliable, and at the short range that a pocket gun is most likely to be used at, the limited capacity isn't too bad. At arms length distance, a revolver is also nice because you don't need to worry about the action being pushed out of battery if the muzzle makes contact with a person or object. I have a Beretta 3032 Tomcat that I liked except that I prefer to put it in my left pocket, and the magazine release gets hit too easily. I kept finding that I would draw the gun and the magazine would be partially ejected. This reduced my confidence in the gun, and lead to carry revolvers.

Shooting is a perishable skill, so I had endeavored to practice with my S&W 37 on a weekly basis, but I couldn't really shoot more than 10 rounds in a day without my hands being in pain. This was not conducive to proficiency. I dry fired the heck out of the S&W 37 and one day the hammer block safety broke. I ordered a replacement part, but at the same time, I felt it was time maybe that I tried something new. So I ordered off of GunBroker a 1918 manufactured Colt Pocket Positive in .32 S&W Long. This gun is 97 years old, made during the last year of World War I. I wish I could find it's history.

Of course, there are modern options in .327 Federal Magnum (that can chamber weaker .32 H&R Magnums and .32 S&W rounds), and .22 magnum revolvers. But the modern offerings are expensive. There are a lot of old .32 S&W long revolvers floating around, and I got a smoking deal on my Colt because it had been refinished.

There are also some good .22lr revolvers around like the S&W 317, but .22LR revolvers seldom penetrate to the 12 inch depth recommended as an absolute minimum in the FBI guide, "Handgun Wounding Factors."

In the next picture, it is compared to the S&W 37. The S&W 37 weighs 17.55 ounces with 5 rounds of Speer Lawmwan 158 grain Total Metal Jacket in the cylinder. The Colt Pocket Positive weighs 18.70 ounces with 6 rounds of 115 grain Buffalo Bore Hardcast rounds. Although the Pocket positive is a bit longer and heavier, it is not by much, and it still fits well in most of my pockets. Mine has a 3.5" barrel on it, but there are also ones with snubbier barrels that would cut down on the length and weight. It is interesting that the Colt weighs almost the same as the Smith & Wesson, even though the Colt uses a steel frame compared to the S&W's aluminum frame. 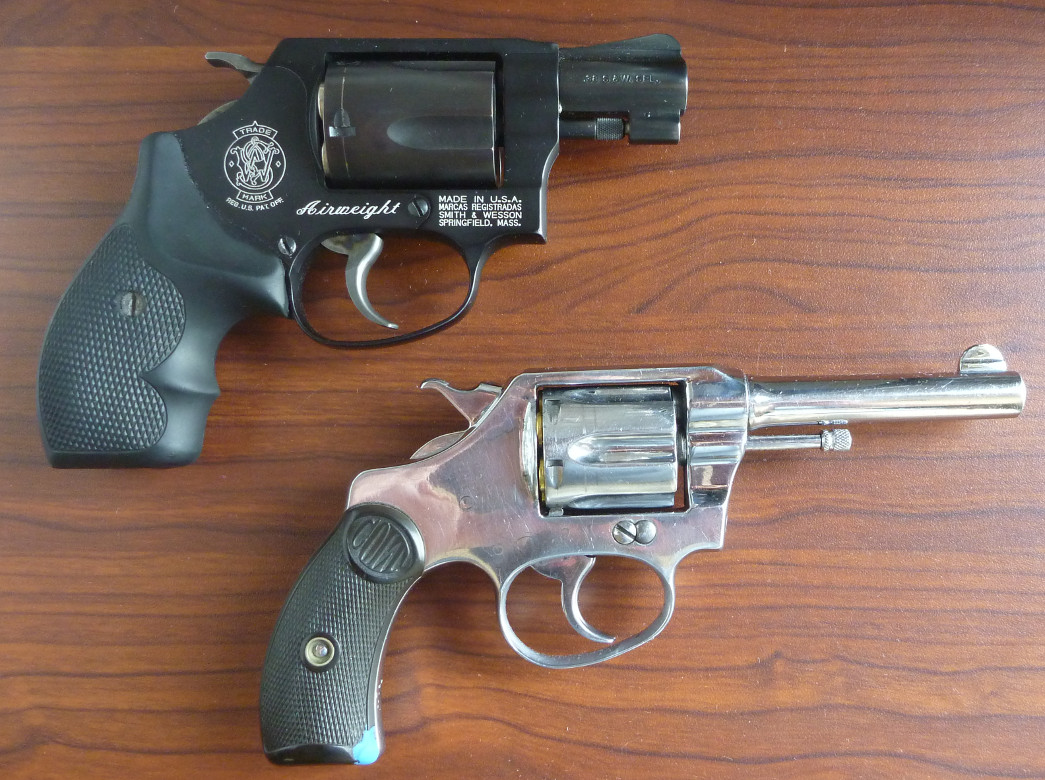 I also tested some 97 gr Fiocchi FMJ rounds, which were advertised at 820 fps and registered 680 fps and 708 fps. On a later day, I tested the Fiocchi rounds over a chronograph again and fired them into gel. The first shot was 756.4 fps, and penetrated about 20 inches. The next shot registered 658.4 fps and penetrated 12 inches before exiting the gel on a left trajectory. Another few shots registered as 684.5 fps and 685 fps and these went around 18-20 inches deep also. The bullets were all found base forward in the gel. The Fiocchi FMJ kicks much less than the Buffalo Bore rounds, are cheaper, do not have exposed lead, and in my opinion penetrate adequately. I consider these to be a suitable defensive load.

Here are the blocks of clear ballistics gel with the .32 cal projectiles in them. 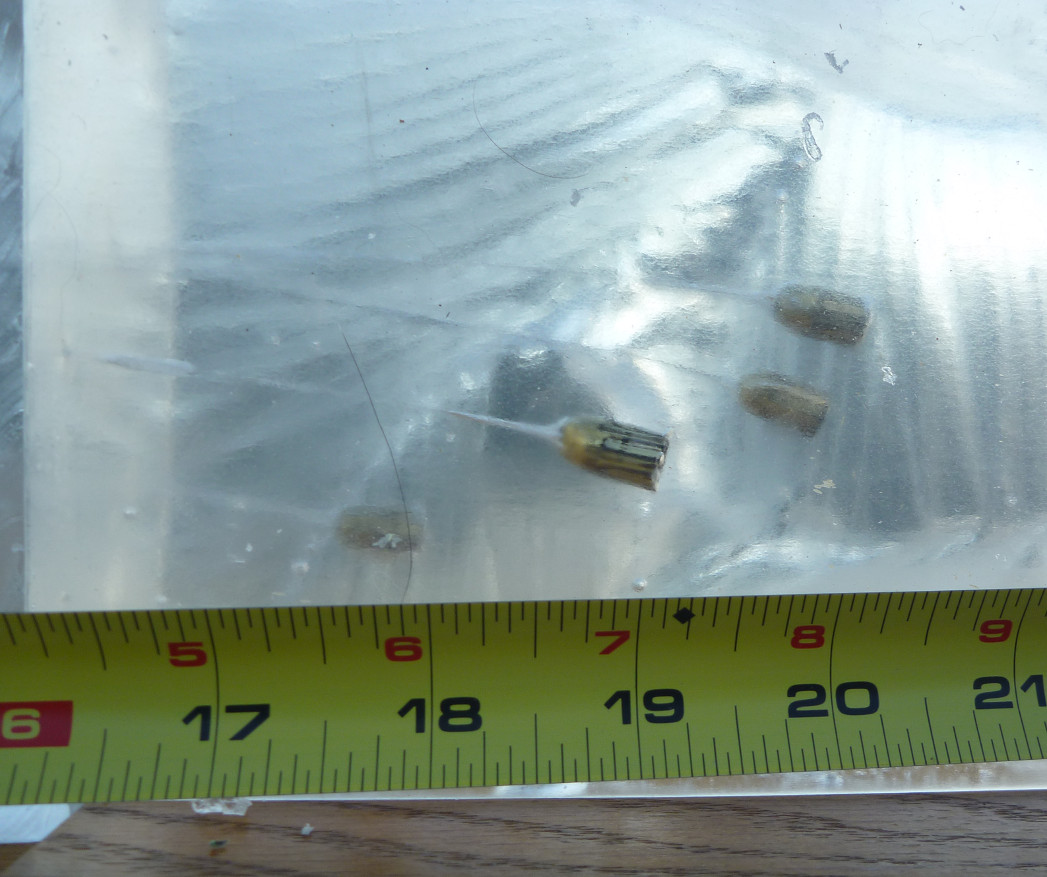 The gel blocks were calibrated with an air rifle. The velocity of the air rifle was 611 fps, 610 fps, and 610.5 fps. One bb went about 2.75", another about 3.375", another around 2.75" and another in that general ballpark. Proper ballistic gel would have such a bb penetrate 3.25" to 3.75". This ballistic gel seems that it is close to being within specifications but may be slightly more stiff than desired. 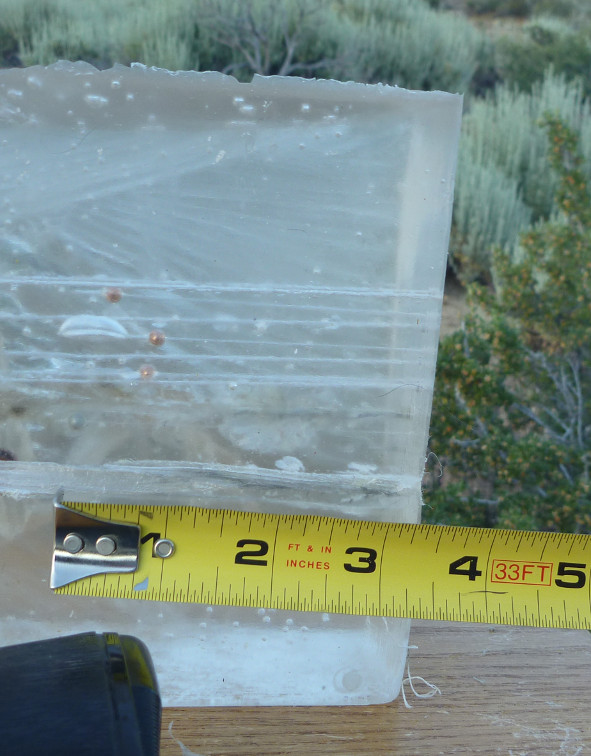 The following video shows these tests being conducted:

I really like this old revolver, and it has replaced the S&W in my pocket. The extra inch of length does make it more challenging to conceal, but the weight is about the same. I appreciate the extra round, I feel the .32 S&W long is also sufficiently potent, and the fact that I can shoot it all day long without my hand getting abused by the recoil means that I can stand to shoot it enough to gain a proficiency that simply doesn't seem possible with the .38 special airweight, at least for me.

My specific revolver seems to shoot high with the Buffalo Bore ammo and the Fiocchi, but I find this to be acceptable.

One problem with this gun is that cocking it into single action mode, it is easy to get pinched by the trigger if you are not careful. I would not cock the Colt Pocket Positive with the index finger in the trigger guard, because if one slips while cocking the gun, it will hurt. It left a blister on my finger that took a week to heal the first time, and the second time I made this mistake it wasn't as bad but took a couple of days to heal. I find that the gun is sufficiently accurate in double action mode.

Here is a picture of what can happen if you get your finger caught: 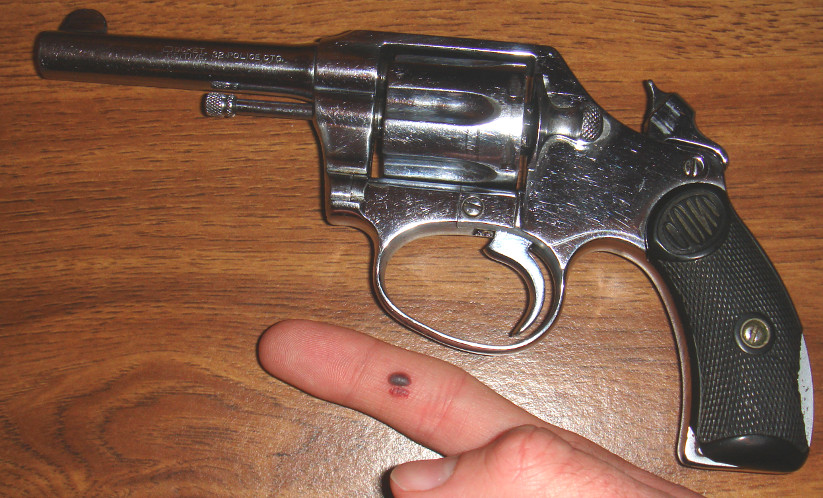 Also, as is common with Colt revolvers, my cylinder only rotates into the exact position it needs to be in at moment the trigger is pulled and the hammer is dropping. Otherwise, it is just a fraction of a degree shy of being fully locked position. I have not experienced any indications of lead being shaved off.

Using a slightly sanded .22 short casing found to hold about 0.2 cubic centimeters, and filling it full of Accurate Nitro 100 [AA N100 (old formula)] and then charging the .32 S&W long case by pouring this 22 short case into a funnel, and using a 78 gr lead .312 Meister bullet, a very soft shooting load was developed.

Powder density variations may exist, and only replicate this at your own risk. These loads worked for me, but I make no claims as to the safety of these loads, and have no idea what pressures these loads develop. Using loads not found in a reloading manual could destroy your gun or injure you. Also be especially aware that there is an AA N100 NF (new formulation) which is not the same as the old AA N100.

With the price of the components I used, the cost per shot was about 11.5 cents per shot (8 cent bullet, 2.5 cent primer, 1 cent powder), which is cheaper than I can presently find .22LR on the internet.

Although I'm not the best shot, the six shot group at the bottom is with the reloads from 7 yards or so distant, and the hole above is from the Buffalo Bore round, using the exact same sight picture and sight alignment. I find that the Buffalo Bore rounds consistently hit about that much higher. 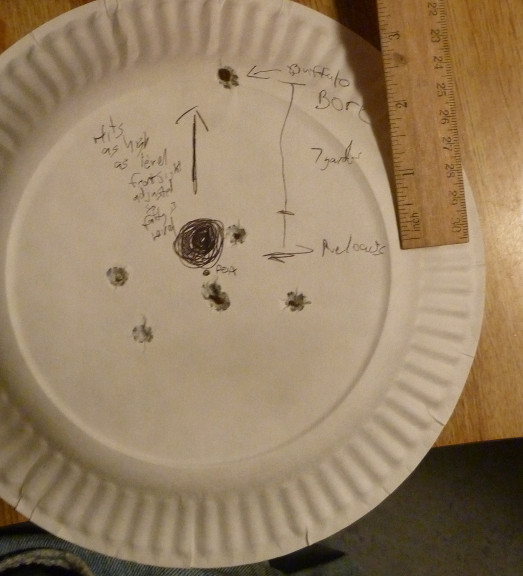