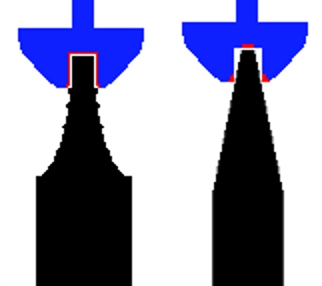 Using the proper screwdriver is important!

When it comes to working on guns that have screws, the importance of a proper screwdriver is often overlooked. Many gun manuals do not expect the user to take apart their guns that far and do not give it mention.

Too often, when an inexperienced gun user attempts to remove the screws on their firearm, seeing the rectangular slots, they will attempt to use an ordinary flat-head screwdriver. Depending on the particular screws used in the firearm, this can work okay, or it can damage the screw slot. The proper screwdriver to use in order to avoid damaging the screws is typically a hollow-ground screwdriver that precisely fits the screw slot.

What is the difference between a hollow-ground gunsmithing screwdriver and a typical flat-head screwdriver?

Why does this matter? Pressure is force divided by area. The larger the surface area carrying the same force is, the less resulting pressure on the screw, and thus the less likely it is for the screw to deform. This is not an issue with many screws, but with screws used in firearms this is often an issue.

Why do some screws used in firearms require special screwdrivers?

If all the force is applied at the center of the screw, it cannot turn. There needs to be a moment arm length in order to apply a torque. A door handle is positioned as far away from the hinge as practical for this reason. If the door handle was only an inch from the hinge, it would take much greater force to rotate the door about the hinge.

Therefore, when turning a screw with a hemispherical head with a tapering screwdriver, one generally uses part of a screwdriver blade that is too narrow to fit the width of the screw slot. This causes the blade to be angled diagonally to the slot direction rather than parallel to it. The screw can turn, but all of the force is being applied at one point on either side of the screw slot edge, and this typically will result in deformation of the screw at those two points.

Why would these screws be used on firearms? Well, sometimes regular screws are used. But reasons for use can very from snag-proofing to aesthetics. An S&W revolver usually uses hemispherical screws. While I have not been told by the engineers what the reason was for this design decision, I imagine it might have a bit to do with snag-proofing. If the screw head stuck out from the frame and had a cylindrical profile, it might be more likely to snag against holsters and clothing.

The screws on this Smith and Wesson revolver are hemispherical. Only a hollow-ground screwdriver should be used on this gun.