When I saw the Taurus Tracker revolver offered in .17 HMR, the first thing that came to mind was that it had the potential to pierce soft body armor. Modern soft body armor is rated up to IIIA, which stops the majority of handgun projectiles. According to tests I've seen, IIIA can even stop 9mm +P+, and .500 S&W Magnum. The weakness of soft body armor is pressure, and rifle rounds typically go through body armor with little resistance because they have such high velocities.

Because they are capable of penetrating armor, for home defense or tactical operations, a rifle in traditional rifle chamberings is advantageous over pistols, shotguns, and pistol caliber rifles. However, in public it is generally impractical to carry a rifle for self-defense purposes because they are so large. As a result, the average person who carries a firearm for self-defense has a handgun and usually has a severe disadvantage against any adversary who armors himself. And body armor is becoming increasingly common among criminals because it is much less expensive than it used to be and is also becoming more comfortable to wear due to advances in armor technology.

Handguns chambered for rifle rounds are often capable of penetrating soft body armor, but in doing so these handguns are generally limited to a single shot or become very large in order to accommodate such large rounds, and similarly become impractical to carry. Many are basically rifles without a stock, such as AK pistols and AR-15 pistols.

However, there is at least one handgun in typical handgun dimensions that is capable of penetrating most soft body armor. This handgun is the FN FiveSeveN. However, not all ammunition choices for this handgun are equally up to the job. In fact, only one of the loads (SS190) from by FN is capable of penetrating the highest strength soft body armor and FN refuses to sell the general public and only sells to law enforcement and military. There are alternative ammunition makers, such as Elite Ammunition, who make capable 5.7x28mm loads. Elite Ammunitions S4M and T6B loadings have been demonstrated penetrating level IIIA body armor, but these rounds are in very short supply. Last time I bought some they cost me nearly $2.50 a round and not long afterwards I witnessed these rounds selling for nearly $10 each on Gunbroker. The FN FiveSeveN itself is also a gun that is often in short supply and typically carries a price tag of over $1000.

The Taurus Tracker in .17 HMR was likely never anticipated as a handgun to defeat armor, but it has all the right ingredients with its small diameter high velocity projectiles. I started reading that various rounds in the Tracker revolver achieved velocities from 1830 fps for 20 grain projectiles to over 2000 feet per second for 17 grain projectiles. This is a major loss from a rifle length barrel where the 20 grain projectiles are advertised around 2350 fps and the 17 grain projectiles around 2550 fps. Out of a rifle, I had no doubt that the armor was no match for the round, but out of the handgun I placed the odds at about 50/50. The CCI .17 HMR 20 grain FMJ round looked the most promising to me for defeating the armor since it is not an expanding round. Expanding rounds work against penetration of a vest because as they expand the force is being applied over a wider area and this prevents penetration. Soft body armor in fact has the remarkable ability to flatten out rounds that would normally be non-expanding in a medium like gel. For instance, a 9mm FMJ will flatten out upon hitting a vest. THe CCI 20 grain FMJ round was advertised as having about 1830 fps out of a 6" barrel. My understanding is that the 5.7x28mm rounds that are in that speed range cannot penetrate the IIIA, while ones that are a few hundred feet per second higher can. But the 5.7x28mm rounds are often expanding rounds, and the smaller diameter .17 HMR FMJ round focuses its energy in a smaller diameter thus increasing the pressure.

Naturally, I set out to test my hypothesis that the Taurus Tracker 17 HMR would be a penetrator. So I got my hands on one, as well as some 20 grain FMJ ammunition and 17 grain Hornady V-Max rounds. And then, I went to bulletproofme.com and ordered a class IIIA test panel (half of a vest). I started off firing 3 rounds of the FMJ into the vest. Of these three one penetrated. I did it again, and only one penetrated. I was thinking maybe I should give the 17 grain V-Max a try as the velocity might give it a try. But again, only one out of three penetrated. I had ballistic gelatin behind the vest panels, made by Clear Ballistics. This special gelatin is not temperature sensitive which is why I chose it. The results were somewhat baffling. Without the vest, the FMJ rounds went about 16" or the whole length of the FBI block, but had not enough energy to penetrate the second block after exiting the first. With the vest in place, the ones that penetrated went about 15 inches into the gelatin. So my results were telling me that the vest either stopped them or offered almost no resistance to the FMJ rounds. The V-max round however showed much different results after penetrating the vest. The V-max round that penetrated the vest went about 5 inches which is about the depth that one would expect with a .17 HMR rifle into bare gelatin. The bare gelatin result for the V-max was surprising, as I got over 10 inches of penetration, much deeper than what one would get with a rifle. Apparently, the high velocity the projectile reaches out of the rifle barrel causes the projectile to fall apart much sooner. I fired a few more FMJ rounds and most of them did not penetrate but a few did.

Fortunately, I videotaped the shooting, and upon viewing the video it was readily apparent what caused the bizarre behavior with the FMJ rounds either not entering the gel at all or going almost all the way through the FBI block. It turns out, that the vest was close to the block in the first shot, but for subsequent shots the vest had pushed itself out and was dangling freely. It is much harder to penetrate a free dangling vest than one that is worn by a person as there is a large momentum loss due to having to push the vest and this leaves a lot less for penetration. Similarly, if you fixed a vest to a rigid board, it would be easier to penetrate than if it was worn because the rigid material has less give than gel, clay, or flesh.

See the videos where I shoot the vest here:

Setting up the vest:

I also tested this panel with a 9mm FMJ, which it stopped cold. Or, should I say, it stopped it hot. The 9mm flattened itself out in the panel and became very hot to the touch.

Without the vest, this 9mm FMJ round will penetrate 31 inches into the gel.

The cylinder almost looks comical with the tiny .17 caliber holes: 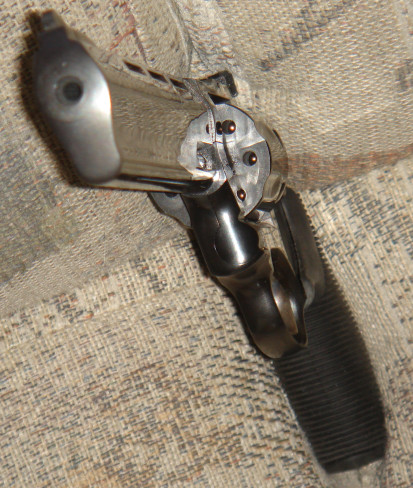 On 1/26/2015, I fired a round at a container of Tannerite at 50 yards with this revolver and CCI 20gr FMJ rounds. It broke the container but did not detonate it. For reference, I've shot the tannerite with my Savage .17 HMR rifle and the same ammunition, and the rifle has always set off the Tannerite.